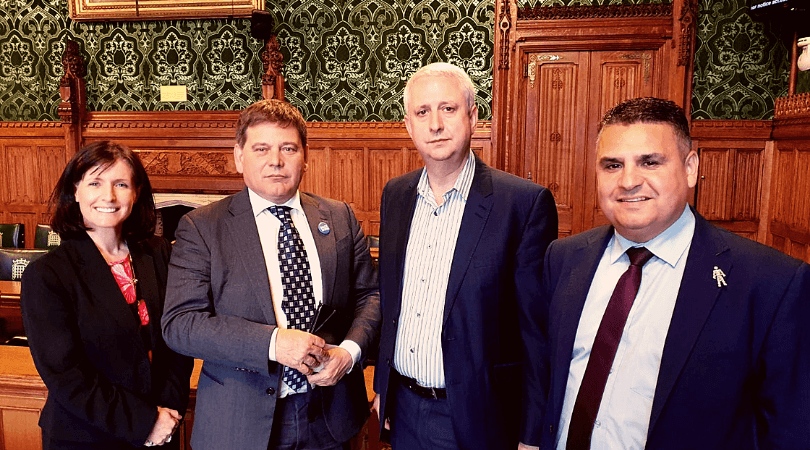 I would firstly like to thank Paula Bradshaw MLA, Andrew Bridgen MP, Ivan Lewis MP & Neil McEvoy AM for taking them time to raise this important issue to MOJ. I have been long campaigning with other campaigners to have Parental Alienation officially recognised and taken seriously her in the UK.

Yesterday, a delegation of MPs met with new Ministry of Justice Minister Paul Maynard MP to discuss the issue of Parental Alienation and the failure of the current family law system to protect child and adult victims. Too often children have no contact with their non-resident parents on a long-term basis despite there being no evidence of abuse or harm.

The delegation handed over a formal submission from ‘Dear Sophie’ campaigners to the Ministry of Justice for consideration as part of their current review of the Family Justice System. The Minister agreed to ask the expert panel overseeing the review to consider the issue of Parental alienation. The MPs will also be seeking a meeting with the panel.

It was also agreed that the MPs will seek a meeting with Lord Justice Cobb who is undertaking a review of the current system on behalf of the President of the Courts Family Division.

At the MPs request the Minister agreed to meet representatives of alienated parents later in the year to hear at first hand of their traumatic experiences.

“Parental alienation is a human tragedy which can cause serious harm to children and parents alike. This meeting and the Ministers positive response was an important step forward. We will now build on this by seeking appropriate changes to the way family courts operate so Parental alienation is recognised as a serious issue which requires a fresh approach.”

“It was pleasing that the newly appointed Minister, Paul Maynard MP, listened to our presentation. It’s clear he appreciates this as a real issue, causing distress to both children and their estranged parents, and this will be included in the consultation on the current family law reform”.

“Court induced child estrangement and parental alienation can be avoided if there is clear policy and guidance for our judiciary. This will require work and restructuring among support agencies, such as Cafcass, however for the short- and long-term needs of children caught into their dreadful situation, it will be worth it. For me, the deliberate denigration of one parent by another to their child(ren) to cause alienation is a serious form of domestic abuse and the sooner wider society and the judiciary, in particular, recognise it for what it is, the better.”

It's been a good day in London. I feel like the UK Government is starting to listen when it comes to tackling #ParentalAlienation. This is just the beginning and we've been invited back. Positive stuff. Welsh Governmemt needs to get on this too.

“It’s great that we’re starting to see some progress on parental alienation. It affects so many people; mums, dads, grandparents and the children themselves. I have confidence that the UK Government will keep listening after our positive first meeting with the Ministry of Justice. The under Secretary of State did assure us that there would be further talks and I welcome that. What was clear from giving evidence was that parental alienation is a common experience not just in Wales, but in England and Northern Ireland too. I hope the Welsh Government can take note from this meeting and start taking parental alienation seriously.”

Parental Alienation usually occurs in an acrimonious divorce where a child ceases contact with the non-resident parent. This is despite there being no evidence of any abuse or harm and is frequently caused by the influence of the other parent. It is common for the child to seek to resume contact as a teenager or young adult when they leave home.

This can have a devastating long-term psychological impact on the child which continues into adulthood, and frequently leads to severe mental health problems for the alienated parent.

In a ground-breaking development, the World Health Organisation have recently adopted Parental Alienation (PA) as a health warning, ICD 11 explicitly defining PA as cause of potential serious health challenge. – based on evidence it is a very important contributor to decline in health.

Reply from Robert Watling in the form of FOI Request

Hello Everyone, A lot of you know I have been campaigning for a while for…

We Must Stop Playing The Game!

Okie Dokie, today has been one of those days 😢. Anyway no time to feel sorry for myself or (cont) tl.gd/non6ve